Intown Quilters Fabric and Yarn is now a web store only with fast shipping!

During The Greater Atlanta Quilt Shop Hop 2018, we demonstrated the Folded Corner Clipper tool being used to help make and end your binding on a quilt. Read below for a tutorial done for you by Angela of The Green Apricot Studio.

You can buy one from us here. 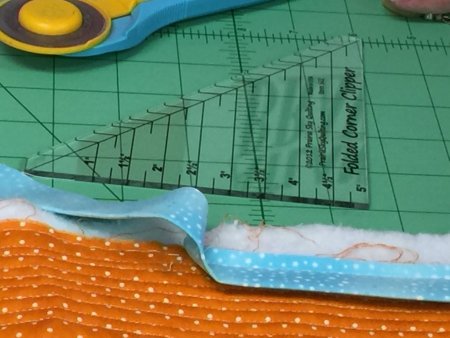 So, binding has been a thing for me for years.  I can’t say that I feel like I make perfect binding, or that I don't have any more room to learn, but I’d say that I’ve come a long way from the slightly rounded, thinly filled and seriously scary stuff I used to do.  Binding is a skill that is important to master, for a number of reasons.  First, it is the first part of a quilt that wears out, so it needs to be done in such a way that it can be replaced as needed.  Second, it is like the frame around a masterpiece, and it can either add to or detract from the overall work.  Thirdly, it’s important to understand that binding is one of the number one things that will cost a quilter competition points.  Not interested in competition?  I get it.  However, there are a number of modernists that would like to see their work get more respect and attention in the traditional shows.  In order for that to happen, there need to be more submissions of modern work that is also a showcase of mastered skills.  As I have often said, there is nothing wrong with breaking the rules of quilting, but you have to know what the rules are in order to know which ones should be broken when, and for what purpose.  I’m not going to go into detail about those rules this time, but I would like to show what I know about joining binding properly.  And without wanting to hurt somebody in the process.

There is great discussion and variance in the width that binding should be cut, and whether or not it should be cut on the bias.  Those are thoughts for another day.  So, just for today, I have cut this binding at 2″ WOF on the straight of grain.  I pressed my seams open at the joins, and pressed the binding lengthwise, wrong sides together.  I have sewn the binding to the front of the quilt, lining up the raw edges of the binding with the raw edges of the quilt top.  I left a generously long tail at both the beginning and the end of sewing the binding to the front of the quilt.


First, line one of the unsewn tails to the edge of the quilt. It's easiest to use the shorter of the two, but it really doesn't matter which one.


Next, using the second tail, cut a small piece off of the end.  It does not matter how big this piece is, but about an inch works perfectly.  Open this small piece out.  The measurement you are interested in is the width of the piece, not the length.  In other words, my binding was cut at 2″, so I am interested in the 2″ measurement of the cut.  If you had 2 1/2″ binding, the piece would need to be 2 1/2″.

Draw both tails out and away from the edge of the quilt and onto a cutting mat.  Open the tails and lay them both face up.

Without changing the orientation of either tail, use the Folded Corner Clipper to cut each tail at a 45 degree angle, with the 1/4″ seam allowance also trimmed off.  (It is possible to do this with a straight ruler with a 45 degree mark, or with other 45 degree tools, but for me, this is by far the easiest one to handle while cutting binding tails for joining.)

Lay the two tails along the quilt edge and notice that they match properly for joining. 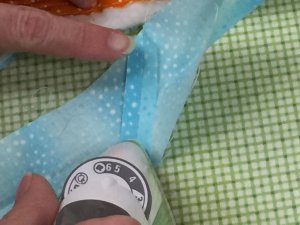 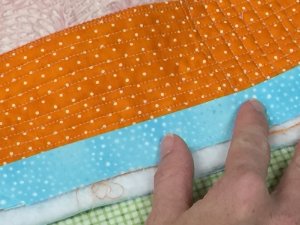 Told ya it was magic. #boombaby